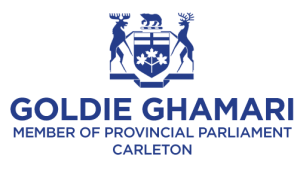 December 17, 2019
Ontario Investing in Community Safety and Keeping Impaired Drivers Off the Road Year-Round in Ottawa

OTTAWA —The Ontario government announced that it is providing police services across the province with the resources they need to combat crime and keep communities safe by investing $195 million through the new Community Safety and Policing (CSP) Grant over the next three years.

Of this significant investment, $13,836,060.06 is being given to the Ottawa Police Service, giving them the necessary tools and resources to enable deployment of frontline officers where and when they are needed most, while supporting community policing initiatives that focus on local priorities such as community policing and more police presence in rural Ottawa.

“This support will play a crucial role in strengthening community safety in Ottawa, including rural Ottawa, while at the same time supporting our hard-working frontline officers,” said Goldie Ghamari, MPP for Carleton.

“Our government is addressing the concerns of our community,” said MPP Ghamari. “That’s why we believe in putting resources directly into the hands of the Ottawa Police Service. They are the experts in maintaining public safety and our primary partner in keeping Ottawa’s communities safe.”

The CSP Grant provides police services with the necessary tools and resources to enable deployment of frontline officers where and when they are needed most, as well as support police services as they implement public safety and community policing initiatives that focus on local or provincial priorities.

Additionally, the Ottawa Police Service will receive $52,786.24 in funding through the province’s Reduce Impaired Driving Everywhere (RIDE) Grant to help detect impaired drivers and keep our streets and highways safe.

This investment is part of the government’s investment of $2.4 million recently announced that will enable a total of 172 police services across the province to carry out this important road safety mission throughout the year.

“With this funding, our local police service will be able to conduct regular roadside spot-checks and education campaigns needed to detect impaired drivers and keep our roads safe,” said MPP Ghamari. “It will help pay for cover sworn officers’ overtime and paid duty RIDE activities, and that’s really important.”

In the last decade in Ontario, more than 1,700 lives have been lost and over 25,000 people injured in collisions involving an impaired driver. With the legalization of recreational cannabis last year, roadside spot-checks have proven even more crucial.

“Impaired drivers, whether by drugs or alcohol, can be found on the road every single day — not just around the holidays,” said Solicitor General Jones. “It’s simple – don’t get behind the wheel if you’re impaired – make alternative arrangements to get home. This single decision can save your life and the lives of others.”

As Ontarians prepare for the holiday season, they are reminded to make plans to get home safely whether by arranging for a designated driver, ordering a taxi or rideshare or taking public transit. They should also take immediate action if they see someone who may be impaired by arranging a ride for them, suggesting alternate arrangements, or even calling 911 if someone is a risk to themselves and others.